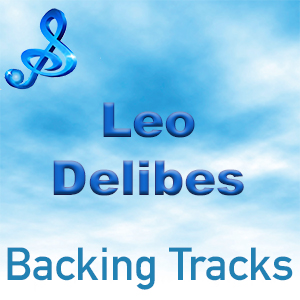 Delibes studied at the Paris Conservatoire and in 1853 became accompanist at the Théâtre-Lyrique. His first produced works were a series of operettas, parodies and farces. He also wrote some church music.

Lakmé is an opera in three acts by Léo Delibes to a French libretto by Edmond Gondinet and Philippe Gille.

The score, written from 1881 to 1882, was first performed on 14 April 1883 by the Opéra-Comique at the (second) Salle Favart in Paris, with stage decorations designed by Auguste Alfred Rubé and Philippe Chaperon (act 1), Eugène Carpezat and (Joseph-)Antoine Lavastre (act 2), and Jean-Baptiste Lavastre (act 3). Set in British India in the mid-19th century, Lakmé is based on Théodore Pavie’s story “Les babouches du Brahmane” and novel Le Mariage de Loti by Pierre Loti.[1] Gondinet proposed it as a vehicle for the American soprano Marie van Zandt.

The opera includes the popular Flower Duet (“Sous le dôme épais”) for a soprano and mezzo-soprano, performed in act 1 by Lakmé, the daughter of a Brahmin priest, and her servant Mallika.[2] The name Lakmé is the French rendition of Sanskrit Lakshmi, the name of the Hindu Goddess of Wealth. The opera’s most famous aria is the “Bell Song” (“L’Air des clochettes”) in act 2.

Lakmé combines many orientalist aspects that were popular at the time:[3] an exotic location, similar to other French operas of the period, such as Bizet’s Les pêcheurs de perles and Massenet’s Le roi de Lahore, a fanatical priest, mysterious Hindu rituals, and “the novelty of exotically colonial English people”

The Flower Duet (French: Duo des fleurs/Sous le dôme épais) is a duet for soprano and mezzo-soprano in the first act of Léo Delibes’ opera Lakmé, premiered in Paris in 1883. It is sung by the characters Lakmé, daughter of a Brahmin priest, and her servant Mallika, as they go to gather flowers by a river.

The duet is frequently used in advertisements and films and is popular as a concert piece. It was adapted for the track “Aria” in the British Airways “face” advertisements of the 1980s by Yanni and Malcolm McLaren. More recently, it has been heard in films such as Meet the Parents and True Romance and television shows including The Simpsons.