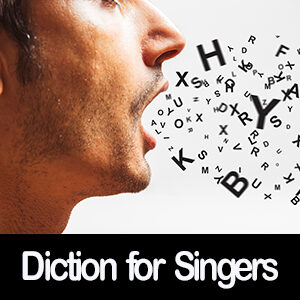 Diction for Singers.   Diction is the art of speaking so that each word is clearly heard. In music, this is very important as without it songs may lose their meaning to the listener. So what is diction for singers?

Although both music and lyrics are important, if the words cannot be understood, the song can become meaningless.

Listen closely to the majority of singers and bands who attain acclaim within their field of music, the one connecting factor is the ability to distinguish the lyrics. When the listener hears a song, the words and music create an image, feeling or emotion to which they can relate. When the song is heard repeatedly this creates familiarity and the listener starts to understand the sentiments further, picking up words, even non-sensical.

For some singers, words can become slurred, mumbled and lazy sounding. The most common causes of poor singing diction can be any or all of the following;

There are examples of singers whose vocals are barely understood or mixed low in the track, and in some cases the effect is intentional to fit the type of song that is being performed, but in most cases, the singer needs to pronounce and project their words clearly.

Diction is made up of a combination of consonants and vowels, and how they are formed will affect the tone and the brightness of the sound they produce.

Singers spend more time singing vowel sounds in comparison to the consonants which is why so much importance is placed on them when practicing. Vowels are formed by the shape of a combination of parts that form the vocal tract including the tongue, lips and nose. Each tongue placement and mouth shape gives the vowel its own characteristic (known as formants) which identify the vowel to the listener eg. sort, sought.

The main vowel sounds within singing are:

Ah as in Apple

Eh as in Air

Ay as in Sky

Oh as in Orange

Ee as in Bee

Oo as in Room

Good diction requires the crisp, clear pronounciation of consonants, whether they start or end the word, without which the audience would be incapable of understanding a word you were singing.   A common fault with singers is that they don’t end the word properly,

eg Don’t go breaking my hah, instead of heart.

So don’T forget to end your words with crisp consonants also.

Here are some very simple diction exercises for singers that you can try yourself to help improve your technique.

Work on improving the clarity consonants. Tongue-twisters are an excellent tool to help you become a master of consonants and avoid slip-ups when singing.

Once you have mastered both consonants and vowels, combine the two:

Once you have mastered the singing diction techniques above, practise breath control. Pick your favourite tongue-twister and aim to say it all in one breath. This will help you to control how much air you expel when you speak and sing.    See our breathing exercises here

If you have a tendency to rush and mumble your speech you will find by working on your diction for singing that your speech will also improve.

Vocal exercises can help you to develop better singing diction by incorporating exercises into your voice training that will undo bad habits and start building new ones.

How To Be More Confident Singing